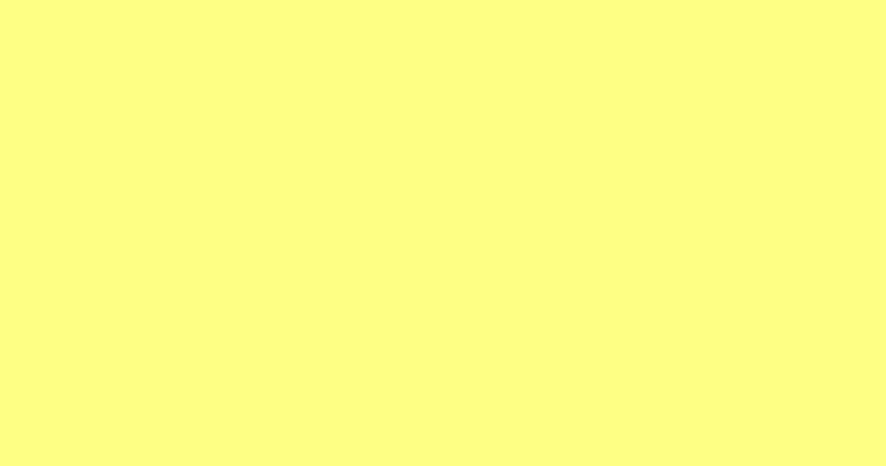 Neil Harbisson can hear your face.

Born with achromatopsia, or total color blindness, Harbisson lived in black and white until his life was transformed ten years ago at a cybernetics seminar, which opened him up to a whole new world of cognitive possibility. He developed a device he calls his “Antenna,” which converts light rays into sound waves and allows him to experience colour in a very different, but very real way- through sound. Then came the slow process of matching the sounds to the taxonomy of socially recognized colors, getting used to the way they sound, and differentiating between the different gradients and  hues. Today, Harbisson can hear and recognize every color available to the human eye, but his perception goes further than that. He can, like birds and dolphins, also hear ultraviolet, and subtleties of shades that are generally unperceivable to the human eye. The creative possibilities of interconnecting human senses, as Harbisson has offered a glimpse into, are endless. Painting portraits through sound. Cooking symphonies. Hearing the sun set.

Synthesesia, the muddling (or union) of senses, has been around for centuries, though it has usually been classified as a developmental disorder rather than an art form. It can manifest in a variety of different ways: there are people who see sound as color, people who feel sounds as emotions, people who taste sound, people who can feel what others around them feel around them using mirror neurons (mirror-touch synthesesia), and the list goes on. As much as it may seem like an unlikely trope from a sci-fi movie, there are scores of talented and widely known artists who are recognized synesthetes and who have used the condition to their creative advantage. Tori Amos. Duke Ellington. Billy Joel. Marilyn Monroe. Vladimir Nabokov. Vincent Van Gogh. Stevie Wonder. Kanye West. Yup, Kanye West.

But inducing synthesesia artificially, through voluntary cybernetic integration, is a relatively new cultural phenomena. Neil Harbisson founded the Cyborg movement in 2010 along with Moon Ribas, his lifelong friend and creative partner, and together they lead a pioneering group of artists who seek to extend their phenomenological knowledge through the expansion of their human cognitive devices. The movement is conceptually grounded in using technology to create new possibilities of perceptive experience, allowing us to sense and thus know more about the world we live in. Moon Ribas uses a seismic sensor implanted in her arm that detects earthquakes around the world and inspires her dance choreography. In her solo dance performance “Waiting for Earthquakes,” she increases and decreases the intensity of her bodily movement in accordance to the magnitude of the global earthquakes she feels under her skin. She also developed “Speedborg” earrings with 360 degree movement sensors, which allow her to know the exact speed and intensity of the objects and bodies moving in her periphery. In an interview with Not Impossible Now, Ribas points to both the exciting potential of technology as a means of expanding perception, but also the humanistic aspect of such an experience. By perceiving the world in a way which is more connected to one’s environment- be it plants, animals, earthquakes or to other people that share one’s space, a new and heightened sensibility is born. Connectedness becomes possible not only in an intellectual or emotional sense but in a truly visceral, bodily sense.

Members of the cyborg movement predict that within the next ten years, humanity will start taking wearable technology seriously; not as a tool or game as it has been understood till date, but rather as a permanent extension of our sensory bodies. The potential? Imagine hearing the world beyond our regular 20-20,000 Hz frequency range, and being able to sense noises up to 100 kHz as bats and dolphins do. Imagine being able to upgrade and change the functions of your ears, eyes, nose and fingertips the way you would download a new app on your phone. Imagine being able to quite literally feel the pleasure or the pain of someone else, in your own body.

That’s not to say that the movement comes unopposed. Some feel that human interference in our bodily structure is morally questionable, just as DNA cloning or cosmetic reconstruction is (to these same naysayers). But the deeper we inevitably wander into the arena of technology, the harder it becomes to distinguish between nature and artifice. The boundaries of what it means to “be human,” and the limits of what is “humanly possible” are pushed and blurred with every passing day. Harbisson addresses the role of cyborg tech in the future of human biological evolution: “We can evolve during our lifetime and we can evolve in the way we wish.” It manifests as a logical step in the age-old human search for meaning, consciousness and self-definition. Whether it takes the form of transhumanists, grinders/biohackers, or as the more artistically grounded cyborgs, there is an undeniable and fast-growing global trend of thinkers (/feelers?) actively seeking to redefine the intersection between techology and biology, disregarding any social stigma that may come with it.

If you’re interested in getting a taste (/a sound?) of life according to Neil Harbisson, you can download his Eyeborg App and use headphones to take a stroll through the sonatas of your local supermarket.

We didn’t have copyright access to any of his photos, so we used an acoustic spectrum analyzer to encode the spectogram of Neil Harbisson’s voice (from the audio of his Ted Talk below), and here’s the portrait we got.
Why so blue, Neil Harbisson? 😛 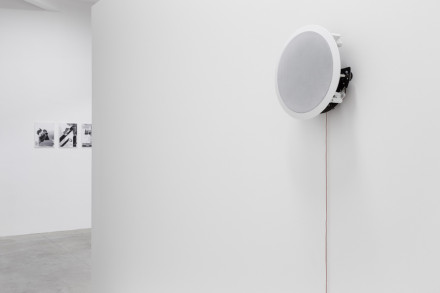 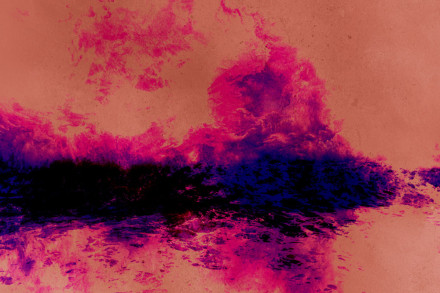